The bird is usually found in tropical zones

Manoj Sanghediya, a 23-year old amateur bird watcher from Datardi Village in Mahuva taluka of Bhavnagar District ( Rajkot, Gujarat, India ), could not identify the large seabird that had fallen in his farm on Saturday.

But he was quick to rescue the sick bird that was unable to fly and take it to Mahuva Town. An environment activist, he often rescues snakes in his village. 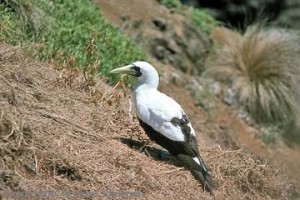 The bird that he rescued was Masked Booby, a large bird found in tropical zones of theoceans.

“When the Masked Booby was brought on Saturday, it was sick and exhausted. We contacted, Dr. Nayan Patel, a veterinary doctor, who earlier worked with forest department in Mahuva advised us to give glucose to it. We tried to save the rare visitor but it died on Tuesday evening”, said a wildlife activist from Mahuva Chirag Koradiya.

Bird conservationists say that the Masked Booby may have been exhausted and landed in the coastal area in a sick condition. It nests on small tropical islands especially without forests. It breeds in central and western pacific as well as off Mexico.

According to experts, Masked Booby are spectacular divers that can plunge diagonally into the ocean at high speeds. They mainly eat small fish.

“This could be the third time that a Masked Booby was reported to be seen on the Saurashtra coast,” Koradiya said.