A recovery strategy will be drawn up

Ministry of Environment and Forests (MoEF) had directed Gujarat, Madhya Pradesh and Rajasthan to have state – level recovery plans for the great Indian Bustard.

Gujarat principal chief conservator of Forests C.N. Pandey said, “We had met experts recently and have now prepared a draft report, which has been approved and is in the final stages”. 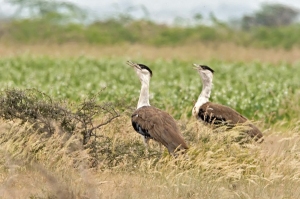 The MoEF had directed all bustard range stages to prepare state – level recovery plans to conserve the species. The proposed plan will aim at long – term conservation of both bustard species in Kutch in Gujarat. With this state-level initiative, it is expected that the conservation of and habitat restoration of Great Indian Bustard (GIB) will get a boost.

Officials in the Bombay Natural History Society (BNHS) said many vital and bio-diverse habitats such as grasslands and species inhabiting the Great Indian Bustard continue to remain neglected.

Officials said grasslands have been threatened for long from rising human pressures on the habitat, indiscriminate grazing outside traditional grounds, poaching, urbanization and several other factors. Several flagship grassland species of birds and animals including GIB, Lesser florican, chinkara, fox and wolf have been affected in various parts of their former range including Kutch (Gujarat, India). According, to BNHS, the Great Indian Bustard are found in six states in India currently and have populations of GIB and Lesser Florican in Madhya Pradesh, Maharashtra, Karnataka, Gujarat, Rajasthan and Andhra Pradesh. In case of Madhya Pradesh, at present there are two sanctuaries for GIB and two for Lesser florican. In Maharashtra, the few remaining GIB are to be found at some locations in districts such as Solapur and Chandrapur. The situation in other Bustard range including Gujarat is also a cause of concern.

It is worth recalling that experts involved in the conservation of GIB had meet chief minister Narendra Modi and urged him to act and take measures to conserve the bird. According to experts GIB is facing threat through the reduction in the extent of undisturbed arid and grassland habitat, degradation and disturbance to existing habitat, hunting, lack of protection for many traditional “lekking” and nesting sites, lack natural grassland conservation in management and policy. Apart, from these issues there is lack of cooperation between departments and stakeholders in GIB habitats. Livestock overgrazing and disturbance by tourists and photographers, especially during the breeding season, have led to the reduction in the bird’s number.