Royal Portrush golf course ﬁrst sneaks into view from around a curve in Northern Ireland’s County Antrim Coast Road, it provides an unforgettable sight: its green fairways hiding amongst shaggy-topped sand dunes, the great headland of Inishowen contrasting vividly with the low line of the Skerries and the sea beyond.

Portrush belongs to one of the most glorious stretches of links land in all of Ireland. Along with Portstewart, Castlerock and Ballycastle, they comprise four of the most natural links courses you are ever likely to ﬁnd so close together. Dotting the coastline, they are spread like gems — created by nature and linked together to form a necklace of beauty. This is golf with a uniquely Irish ﬂavour.

But it’s not only classic golfcourses that reign supreme here. Steeped in myth and legend and inhabited by giants, ghosts and banshees wailing through the sea mist, the Causeway Coast has one of the most dramatic coastlines in the British Isles. It is also home to the spectacular Giant’s Causeway and some wonderful seaside towns with legendary Irish hospitality.

“Fire away lads,” says the starter as I study the course guide and nervously draw a three-wood from the bag. Royal Portrush throws down the gauntlet right from the very ﬁrst tee. Established in May 1888 and included in every list of the world’s top 100 golf courses, Portrush has long been regarded as a great test of a golfer’s skill. Had it been more suitable in other respects for staging a modern British Open Championship, it would almost certainly have held more than the one it did host in 195 1, when  England’s eccentric Max Faulkner lifted the trophy. 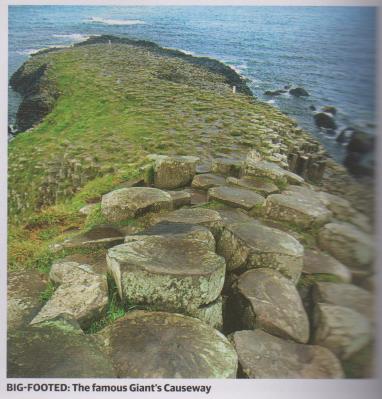 This is links golf at its very best, with everything you expect to ﬁnd on seaside courses — blind shots, deep pot bunkers, running fairways, lightning fast greens, strong winds and the taste of salt in the sea air. Not golf for the fainthearted, to-be-sure, to-be-sure…

There are plenty of great holes but there is one in particular that will almost certainly be etched in your memory long after you leave. This is the 210-yard par three 14th known as Calamity. It calls for an accurate long iron or hybrid shot that must not go right. To slice or push the ball will earn you an almost sure double bogey, because the links land falls away severely down a steep slope. Don’t be ashamed of taking a four at Calamity — threes are as rare as an unfriendly Irishman.

Acquiring a new supply of golf balls proves a more challenging task than losing them in the penalising rough of Portrush, so we head to nearby Bush-foot Golf Club, a quirky 9-hole course just down the road.

“l’ll take you to see Mary Neil, the local golf ball dealer,” says Hutch the affable barman, after we explain our predicament. Inside the small shed in Mary’s backyard, quality golf balls are neatly arranged in separate compartments. “The golfers keep losing them and I keep ﬁnding them,” says Mary with a smile. “I’ve found 1,900 golf balls since January. The price is £5 for twelve.” We stock up with a four-dozen assortment ready to face our next big challenge just a few kilometres up the coast — the classic links of Portstewart.

It’s a claim that’s often made — Portstewart has the best opening hole in Irish golf. Played from a high tee with topography that bucks and plunges like a raging river, the golfer needs more than the stunning coastal views of nearby Donegal to steady the nerves. But it is the sixth-hole, aptly named ‘Five Penny Piece’, which often proves the toughest challenge. Although only 125 metres, depending on the wind, it can call for anything from a three-iron to a wedge.

Over the next few days, we play some of the most challenging golf courses to be found anywhere. The driving in between is pure pleasure. The road hugs the coast with spectacular ocean views occasionally going through small towns that retain old seaside charm.

Just a few kilometres out of Portrush are the haunting ruins of Dunluce Castle that date back to the 16th and 17th centuries. It perches precariously on the edge of a rocky headland, thanks to a violent storm in 1639 that caused a portion of the castle’s kitchen, along with the cooks to tumble into the sea. It was the main fort of the Irish MacDonnells chiefs of Antrim. Tours of the castle are offered regularly throughout the summer months.

Close by is the small town that is home to ‘Old Bushmills’ — the oldest licensed whiskey distillery in the world. It celebrated its 400th birthday in 2008 and behind that milestone is a tale of ingenuity, craftsmanship and a quest to perfect the art of distilling. 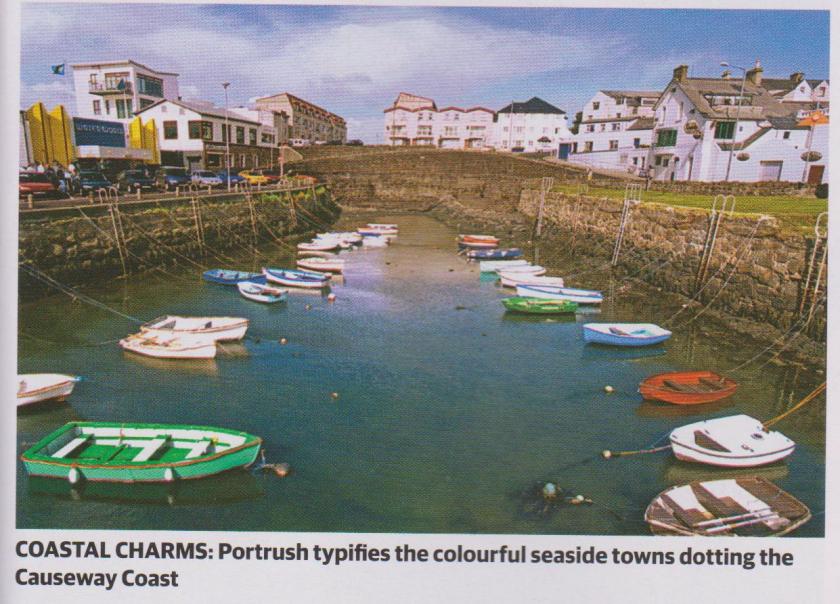 A couple of par-5’s away from Bushmills is the world famous Giant’s Causeway. Legend has it that the causeway— steps made up of thousands of hexagonal pillars that climb out of the Atlantic Ocean — was created by Finn MacCool, an Irish giant that lived along the Antrim Coast. The logical and less romantic version is that about 60 million years ago there was intense volcanic activity along the coast, after which the lava cooled very quickly. The uneven cooling rate resulted in the basalti contracting into hexagonal and octagonal pillar shapes.

Another attraction in the area is the stunning Carrick-a-rede rope bridge that spans a gaping chasm between the coast and a small island used by ﬁshermen,

The terrifying 50-metre drop can be crossed via a swinging rope bridge — not an experience for the fainthearted. Tourism in Northern Ireland is definitely on the increase and visiting the Causeway Coast is a great place to begin. The golf courses are a string focus and there are plenty of other diversions, but it will ultimately be the people you meet that will make the most lasting impression.