The people of Saurashtra(Gujarat, India) take care of lions as they would of their family members. If they spot a lion i 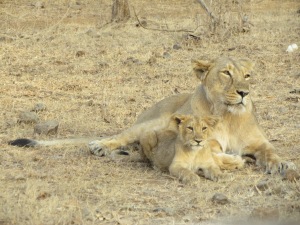 n the vicinity of their village, they take pride in the fact and protect it. These statements were made by the government in the assembly for the first time.

Minister of state for forests and environment Govind Patel – in response to a question from Nikol MLA Jagdish Panchal – informed the house that lions were found in many places of India, but they survive only in Gujarat owing to people’s conservation efforts.

“They are the pride of Gujarat and it was only because of the people of Saurashtra that the lion population grew,” Patel said.

“Even if lions attack cattle in villages, the villagers are tolerant of lions”.

Patel told the house that government has also created post of ‘van mitras’ who take care of the animal and keep a watch on the movement inside the sanctuary. He said 898 eco-clubs had been formed in the Saurashtra region.

Responding to a question Patel said that there were 411 lions – 97 males and 162 females – in the sanctuary. He further said that the state had created gene – pool centers. Five new cubs have been born in the last year at the Rampara Virdi centre. These cubs have been born to two pairs of lions captured from completely different areas and brought to Rampara to ensure that the genes different. These centre’s provide a shield against weakening genes of Gir Lions.

For example if the lioness was from Sasan (Gujarat, India), the lion would be from a far off area of Tulsishyam(Jungadh, Gujarat, India) or even Bhavnagar. The minister said that there have been no instances of villagers offering baits to lions in order to show the animals to visitors. However, he admitted that his department had penalized people caught on the spot to the tune of Rs. 93,000 to Rs 31,400.

One thought on “For Saurashtrians(Gujarat, India), “lions are like kin””