Sighting of rare species of owl here, for the fifth year in a row, has left avian aficionados thrilled. Bird watchers in the city claim that the Pallid Scops Owl (Otus Brucie) which has been spotted at Zainabad(Gujarat, India), about 95 km from the city, during this time of the year for past five years is the same bird. Dhanraj Malik, the owner of Desert Courses who first spotted the bird and posted its pictures, said, “When the bird was again spotted in 2009, we weren’t sure weather it was the same bird. I took pictures of the bird from every angle and posted it on internet. Bird watchers from across the world confirmed that it was the same bird which had visited the spot the previous year.” 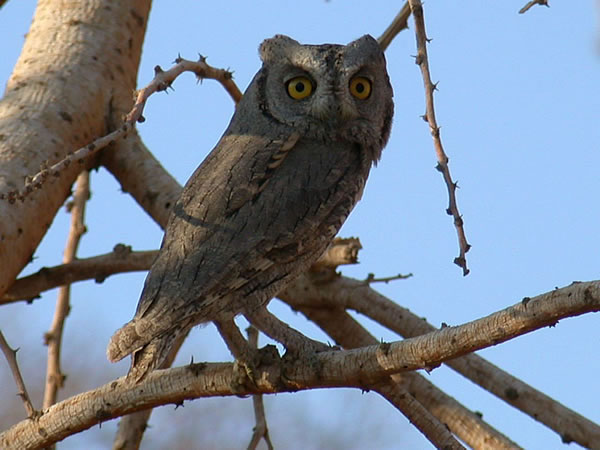 This is the fifth year when the bird has been spotted in Zainabad(Gujarat, India). Malik said, “The bird has arrived a tab bit late than its usual schedule. But that is normal considering the changes in climate. To ensure that the bird feels at ‘home’, we ensure no pesticides are ever used near the spot that it usually occupies. The owl also has a favorite tree here, so we ensure that not a single branch of the tree is chopped.

The owl makes nest on the tree till end of February. Malik said that birds have an in built GPS(Global Positioning System) system that helps them find their way back to the same place, like this Pallid Scops Owl.

Wildlife photographer from Banglore Shreeram MV has visited Zainabad(Gujarat, India) thrice in the past four years just to photograh this rare owl. Shreeram said, “The first time I saw it, I was in awe. Since then I have returned every year to spot the owl. This is a very rare bird and I don’t want to miss the opportunity to photograph it. This year too, I will be visiting with a team of photographers at the end of the winter to click photographs of the owl”.

Birders from across the world are already booking their dates to see the bird. Malik said,” There was a researcher from New York who had done her PhD on Pallid Scops Owl but had never seen it. This year she saw the bird for the first time.” 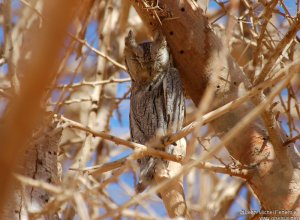 Manisha Rajput, a bird lover and a wildlife tour operator, said, “The migratory pattern of the bird is that of a passage migrant which means that it takes more or less the same channel every year. This is an endangered species and spotting it is a big moment for the bird watchers. So many foreign tourists have booked tours because they want to catch a glimpse of this owl”.

Says Manish Vaidya, a Wildlife activist, ” Not only does the bird follow the same route, it also choses the same spot to make a nest and migrates at the same time every year”.