Gujarat has the highest number of Lesser Floricans in the country. A recently published study of the Wildlife Institute of India reveals that Lesser Floricans in the northwestern region of the country were sighted only in Gujarat, Rajasthan, and Madhya Pradesh. And Gujarat recorded the most sightings, 54; in Rajasthan, 18 were sighted; and 12 in Madhya Pradesh.

During the study— carried out by G.S. Bhardwaj, K Sivakumar and Dr Y V Jhala —84 Lesser Floricans in all were sighted during the breeding season of 2010. However, the number was 65% lower than the figure reported in 1999.

The team surveyed 91 grasslands, which included the grasslands studied in 1999. Lesser Floricans were found in only 24 grasslands as against 37 in 1999.

Indeed, all is not well with the Lesser Florican population there has been a fall of about 62 per cent in sightings in Gujarat since 1999. That year, according to the report, there were 141 Lesser Floricans in Gujarat, 63 in Madhya Pradesh, and 34 in Rajasthan.

Several grasslands have degraded due to grazing, or been planted with trees that make them unfit for Lesser Floricans. 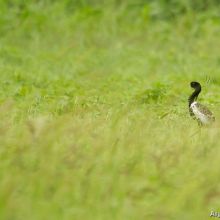 Management of invasive species
Eradication of gando baval and other invading tree species from the selected grasslands in the north-western India should be taken up on a war footing.

Lack of national policy on grassland management in India
Due to inadequate grassland conservation policy, people assume grasslands as wastelands or pasture. These areas have been extensively planted with trees species including ‘gando baval’ (Prosopis Juliflora). Several grasslands in the regions have been converted into either woodlands or fields.

Invasive species
Invasion of gando baval was reported in several grasslands in the north western India. Apart from gando baval, several other tree species were also observed invading the grasslands largely due to grazing. Grazing of cattle expedites the spread of invasive species.

Rampant pollution
Lesser Florican is an omnivorous species. Foods of Florican include many types of invertebrates, and various plant parts along with grass hoppers, beetles, flying ants, hairy caterpillars, centipedes, worms, frogs, small lizards, crop shoots, leaves, herbs and berries. Insects form a large part of their diet. It shows that the Floricans prefer areas near the agriculture farm largely due to better availability of food. Intensive cultivation using rampant pesticides is a challenge to remaining population of Floricans.